All MSP procurements are not through APMCs. In major wheat and paddy procuring States like Punjab, Haryana & some parts Rajasthan procurement from farmers is undertaken by the FCI/State Agencies through Arhatiyas as per APMC Acts of the concerned State for which commission @ 2.5% of MSP is paid in the States of Punjab & Haryana and @2.25% in Rajasthan. In other States like MP, Chhattisgarh, UP, Uttrakhand, AP, Tamilnadu, Bihar, Jharkhand, Odisha, West Bengal procurement is made through Co-operative societies and they are paid fixed remunerations at following rates-Wheat: Rs 27.00 /Qtl, Paddy (Grade ‘A’):  Rs 32/Qtl, Paddy (Common) : Rs 31.25/Qtl. (https://fci.gov.in/procurements.php?view=86). In states like Telangana and Andhra Pradesh they are procured through the procurement centres set up with the women self help groups and they are paid the fee.

Government of India is the biggest buyers and hoarder of food grains, particularly rice and wheat. The government procures 40-50% of the marketable surplus in rice and wheat (The Socio Economic Survey, 2019-20).  But unfortunately, this procurement does not benefit all the farmers, as much of them are procured from very few states. 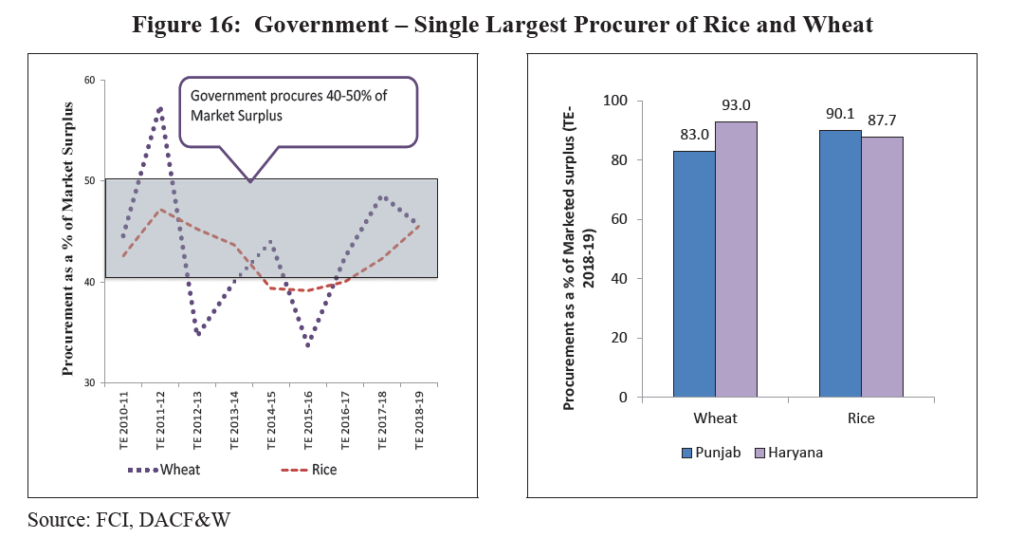 The data from 2018-19 as in Kharif Price Policy report, 2020-2021 and Rabi Price Policy Report shows that major procurement happens from two or three states. This causes significant distortion in the benefits of MSP reaching to the farmers. For eg. in Punjab 89% of the paddy produced (90.1% of marketable surplus) is procured during the kharif marketing season of 2018-19. Predominantly rice producing states like UP, West Bengal (which together have 27% cropped area) have less than 20% of procurement. Same is the case with wheat. As a result, some states have benefited more than other states. While 95% of farmers in Punjab got benefited less than 10% of the farmers in UP got benefitted. 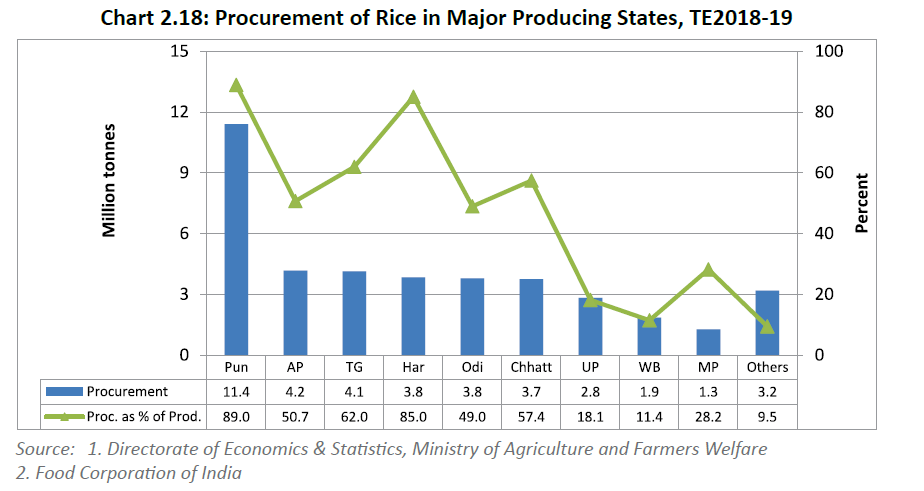 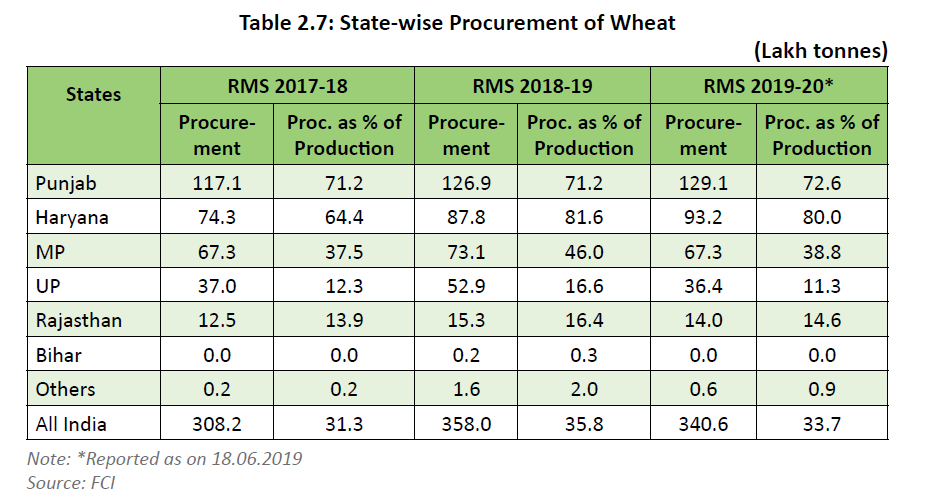 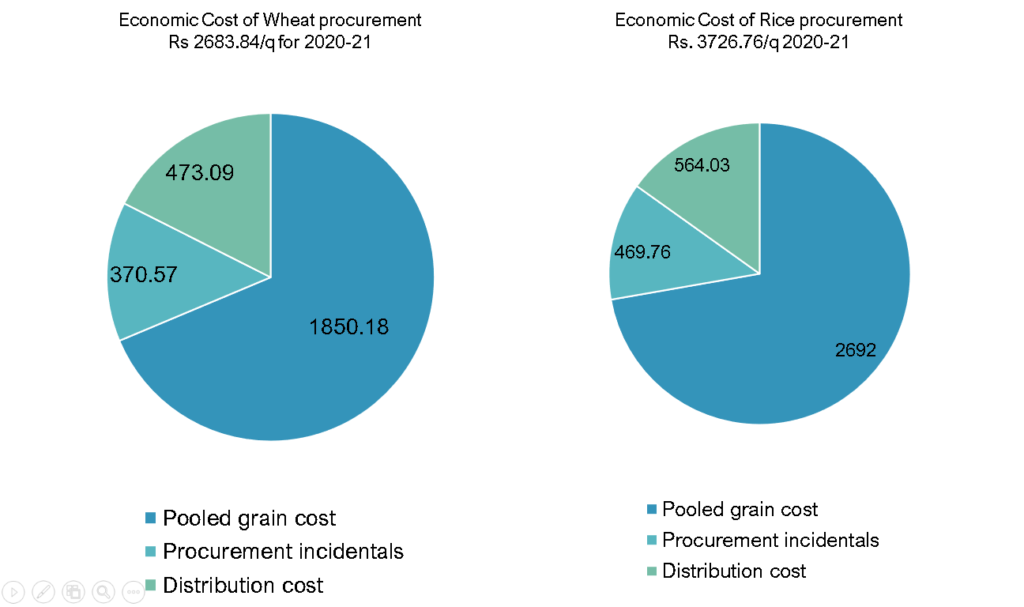 The wheat and rice are issued to the states at the following prices for different categories of the beneficiaries as per the following tables.

To know more about how costs are fixed read https://dfpd.gov.in/procurement-of-food-grains.htm

In case, the common rice is issued in the states of J&K, Himachal Pradesh, Sikkim, Uttaranchal and NE states, the applicable price is Rs. 795 per quintal for APL category only

After 1997-98 decentralised procurement (DCP) was initiated and states who opted for the scheme are paid for local procurement and distribution. Many states have already made a shift towards this (). As the result the take-off from the central pool started coming down and the food stocks started accumulating. States like Punjab are continuing to contributing to the central pool (https://indianexpress.com/article/india/punjab-govt-rejects-centres-proposal-to-dial-down-foodgrains-supply-to-central-pool-6159879/) even though there is no take off by the states (https://fci.gov.in/sales.php?view=36) .

FCI does dispose its stocks from time to time. While a portion of the stock goes to the TPDS (Targeted Public distribution System) and households identified under NFSA (National Food Security Act) and other welfare schemes, the balance is sold through the open market sale scheme (OMSS) and FCI doesn’t get a good price most of the times – it actually ends up selling at below cost and end up incurring loss. (https://www.thehindubusinessline.com/economy/agri-business/with-stocks-piling-up-fci-is-in-deep-trouble/article29268321.ece)

During the 2019-20 the cost evaluation of the stocks shows as follows.

The centre opted for Open Market Sale of the produce at a subsidised prices to reduce the burden of the stocks (https://fci.gov.in/sales.php?view=32). This cheaper release of food grains into the market cause the major distortion in the prices.

These distortions also added to the ecological costs. The farmers continued to grow paddy and wheat system which use high groundwater resulting in depletion (http://www.jcreview.com/index.php?mno=117545), the short gap between the two crops resulting in stubble burning (https://www.downtoearth.org.in/blog/agriculture/stubble-burning-a-problem-for-the-environment-agriculture-and-humans-64912#:~:text=According%20to%20a%20report%2C%20one,soil%20nutrients%2C%20besides%20organic%20carbon.), high use of agrochemicals polluting the environment etc.

As mentioned earlier MSP procurement operations have created wide disparity in cropping patterns as only rice and wheat are procured by the state. Farmers are not willing to make a shift towards other crops even if these are consuming high amount of water, electricity and huge environmental pollution due to Methane and Nitrous Oxide emissions, stubble burning etc.

The shift needs to be into concentric circles of internalisation and self-sufficiency from district to state to national level. If MSP has to ensured from farmers and states side shift in cropping patterns is also very essential.

To make this happen

There would be regional variances in productivities, costs of cultivations, quality, there would be yield variances between varieties in a crop and between crops.  Fixing and guaranteeing any price will always causes distortions in cropping patterns and practices and regional imbalances. Course corrections will always be necessary.